Our Brains – How They Work: Created to Help Us Succeed!

We have more human potential than most of us are aware of. Due to this ignorance, we fail to tap into our existing power. What’s worse, most people are unknowingly self-sabotaging their potential.

Our brains were designed to help us succeed. It’s true, though that same power, when not understood, can sabotage us or hold us back. Let’s take a moment and discuss this all-important, life-changing topic.

It’s true: we have more potential than most of us tap into.  Why is that, you ask? We don’t tap into the full potential of our brains because we’re blinded to our own power. After all, it’s not something that is currently discussed mainstream. It’s not taught in public schools. How would you know, unless you’re taught, or you’re an avid reader seeking truth?

First and foremost, human beings are spiritual beings living in a physical body. Most people think the other way around: that we are physical beings that have a spirit.  Our spirit is energy, in fact, everything around is a form of energy. This is important, and we’ll come back to this point in future discussions.

Scientifically, we know our physical bodies are made of the same chemical substance as the earth. “Almost 99% of the mass of the human body is made up of six elements: oxygen, carbon, hydrogen, nitrogen, calcium, and phosphorus. Only about 0.85% is composed of another five elements: potassium, sulfur, sodium, chlorine, and magnesium. All 11 are necessary for life.”

SQ: We have spiritual intuition and the ability to tap into our inner spirit for guidance and direction.

PQ: We have physical intelligence in that our body runs on auto-pilot mode; our bodies cells reproduce, our heartbeats and pumps blood and oxygen throughout our veins, and our digestive systems all function without us having to mentally think about those functions, and so many more.

EQ: We have Emotional Intelligence, a term founded in 1990 by Peter Salovey and John D. Mayer to describe “a form of social intelligence that involves the ability to monitor one’s own and others’ feelings and emotions, to discriminate among them, and to use this information to guide one’s thinking and action. This is something humans have done all along, though the process wasn’t acknowledged and labeled until then.

IQ: Of course, we’re all familiar with the term IQ, for Intellectual Quotient which measures your intelligence in a number. Intelligence is defined as “The whole of cognitive or intellectual abilities required to obtain knowledge, and to use that knowledge in a good way to solve problems that have a well-described goal and structure.”

If we were to look at a diagram of our brain, we could label the sections that correlate to these bits of intelligence.

The first layer is the reptilian brain which is at the stem of the spinal column. This is where the first reactive thoughts of the fight, flight, or freeze occur. This is a natural response that kicks in before we are consciously aware of our thoughts. Our body language and reactions stem from this area of our brain. 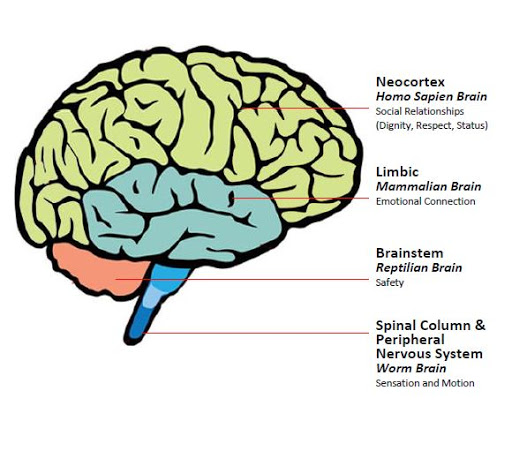 Additionally, neurotransmitters are passing information in between cells in our brain at hyper-speeds. Until we have trained our minds to think about our thinking processes and capturing those internal thoughts, before we can reach that level of maturity, we live in an auto-response mode or in a reactive mode; rather a more thoughtful responsive mode.

The second layer of our brain is limbic, which is in the middle of our brain. This is where emotions and feelings are stored. These are at a subconscious level, we aren’t really thinking about where the emotions are stemming from.

The third layer of our brain is the neocortex, in the frontal lobe. This is where logic and language occur.

Have you ever been arguing with someone using reason, and they are not able to connect with the logic?  Perhaps you’ve found yourself saying, “You’re so emotional! That’s that even rational or logical!” Well, that’s true: the emotional person is not using logic.  In fact, look at the diagram of the brain: the bodily reactions stemming from the reptilian brain are hit first, then the limbic.  A person in an emotional is stuck between the reptilian and limbic brain. They are not able to tap into the logical portion of their brain in that emotional state.  So it very true that when you’re arguing with an emotional person, you cannot use logic. At that point, it’s time to reschedule your discussion.

As for the Spiritual Intelligence, as the diagram shows, that’s more from the pre-frontal cortex. It’s been said that we need to get our PQ, EQ, and IQ in alignment, and then the higher powers of our SQ will show-up and take us to a higher level of awareness with higher frequencies of energy and thought.  This is where the real power is!

It sounds like a lot to learn: but remember when you were learning to drive a car? It was, at first, a bit overwhelming. Learning to watch the road in front of you, shifting gears, watching your rear-view mirror, remembering to use the turn signals and looking over into your blind spot before changing lanes, anticipating what the other drivers are doing and learning the rules of the road! Wow, you thought you’d never get the hang of it. But what happened? One day you didn’t have to think about driving anymore: You’re able to drive, and talk and think about other things: you’re driving in auto-pilot mode!  Seriously, can you recall having been out and about, then got tired and headed home, only to find yourself at home and you don’t remember driving!

Our minds were created with a success mechanism: when we know how to use our brain, we can develop success habits and let them run on autopilot to help us succeed! Candace Mae spends her days steeped in connectedness with Christ's Spirit to allow her the Divine insight and guidance on personal and business growth. Whether she's working with her staff, or coaching women in leadership, executives, and business owners – or serving as a Marketplace Care Partner, her sole focus is on integrating love in the workplace to better herself and her clients.

She is developing people-centric, value-based, compassionate servant leadership that CARES. These are the tools she teaches: Communication, Attitude, Relationships, Equipping others, and Sales.

By helping leaders who struggle with a toxic environment - unengaged employees, high absenteeism, and turnover, constantly putting out fires, and internal conflicts – transform it into a warm and welcoming environment where high trust, morale, and productivity. As a result, people look forward to coming to work.

I am most excited about my Upcoming Book: “Heaven Within: Restoring Wholeness for Better Leadership.”

You may also contact Candace at Leadership Speakers Bureau to schedule her for speaking or leadership engagements.